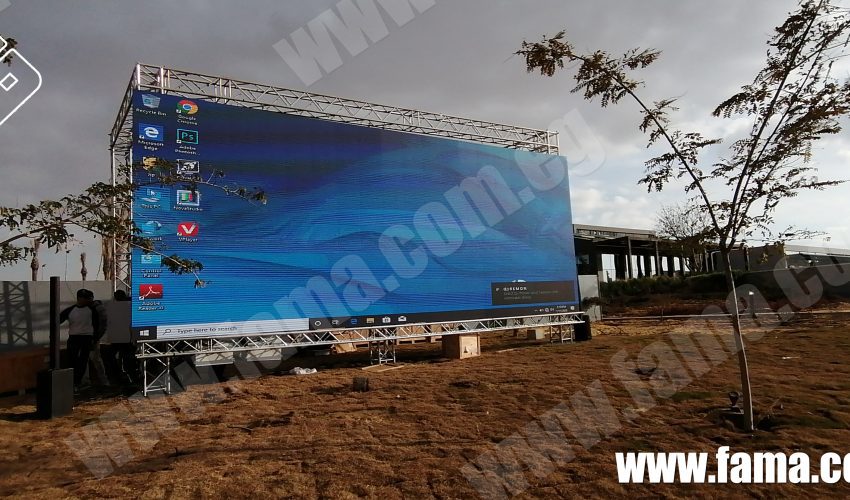 Fama is widely regarded as Egypt’s best company for selling and maintaining LED screens. We distinguish ourselves through flawless quality, reasonable prices, suitability for all services, and experience in knowing how to best present your service on the most recent display screens for advertisements, which are only available through the Fama company. Fama Company is a company that specializes in making ads and programs and keeping them up to date.

We give you complete control over the content displayed on the advertising screen.

To provide the required size for the screens, the company manufactures all sizes of tiles used in screens, including large, small, and medium tiles. and LED screen maintenance.
LED screens are thought to be the newest and best way to advertise in recent years because they are the best in size, shape, quality, and cost, among other things. Because of this, they are the fastest way to reach your target customers.

As a result, many people are interested in high-quality LED screens and the best places to buy and maintain LED screens!

LED screen screens are electronic advertising boards. This is the most recent modern display method that is commercially used around the world. The advantages of Fama LED screen screens include increased efficiency and effectiveness in delivering your advertisement to the public while using less electricity.

Advertising screens are simple to install, especially external LED screens from Fama, where the display screens use a technology known as “diode.” Diode technology has recently emerged as a new alternative to transistor technology, which is used in televisions. The name is derived from the fact that it is made of LED material and that LED lamps are used to light and operate it, which has very high luminous power despite consuming very little power.

The display method is recorded, in which we place the recorded advertisement inside the LED screen and leave it to be displayed. One of the benefits of LED screens is the ease with which they can be controlled remotely.

LED screens are classified into several categories and models, including: -Ph6, -Ph8, -Ph10

The numbers following the letter p indicate the distance between the LED bulbs in the screen, and it is important to note that the greater the distance, the lower the screen resolution, which also affects the degree of image clarity. Because they contain light-emitting diodes, which are made up of an anode and a cathode (hence the term “anode-cathode”).

When both are separated at opposite ends and the electrical current is connected, the atoms are excited quickly from the anode, which has the most energy, and they fall. As a result, the crystal coalesces in one direction, and electricity is delivered to it as a whole in the form of a photon, and thus one of the light radiations with a specific frequency occurs and has a wavelength as well as a specific color emitted by the LED, explaining the special multi-color ability of LED lights.

Fama is widely regarded as Egypt’s best company for selling and maintaining LED screens. We stand out because our products are of the highest quality, our prices are fair, they can be used for any service, and we have the experience to know how to best show off your service on the newest advertising screens, which are only available through the Fama company.

LED display screens in the halls to watch the World Cup

Black Friday offer on LED screens for restaurants and cafes

The distinction between LED and LCD screens